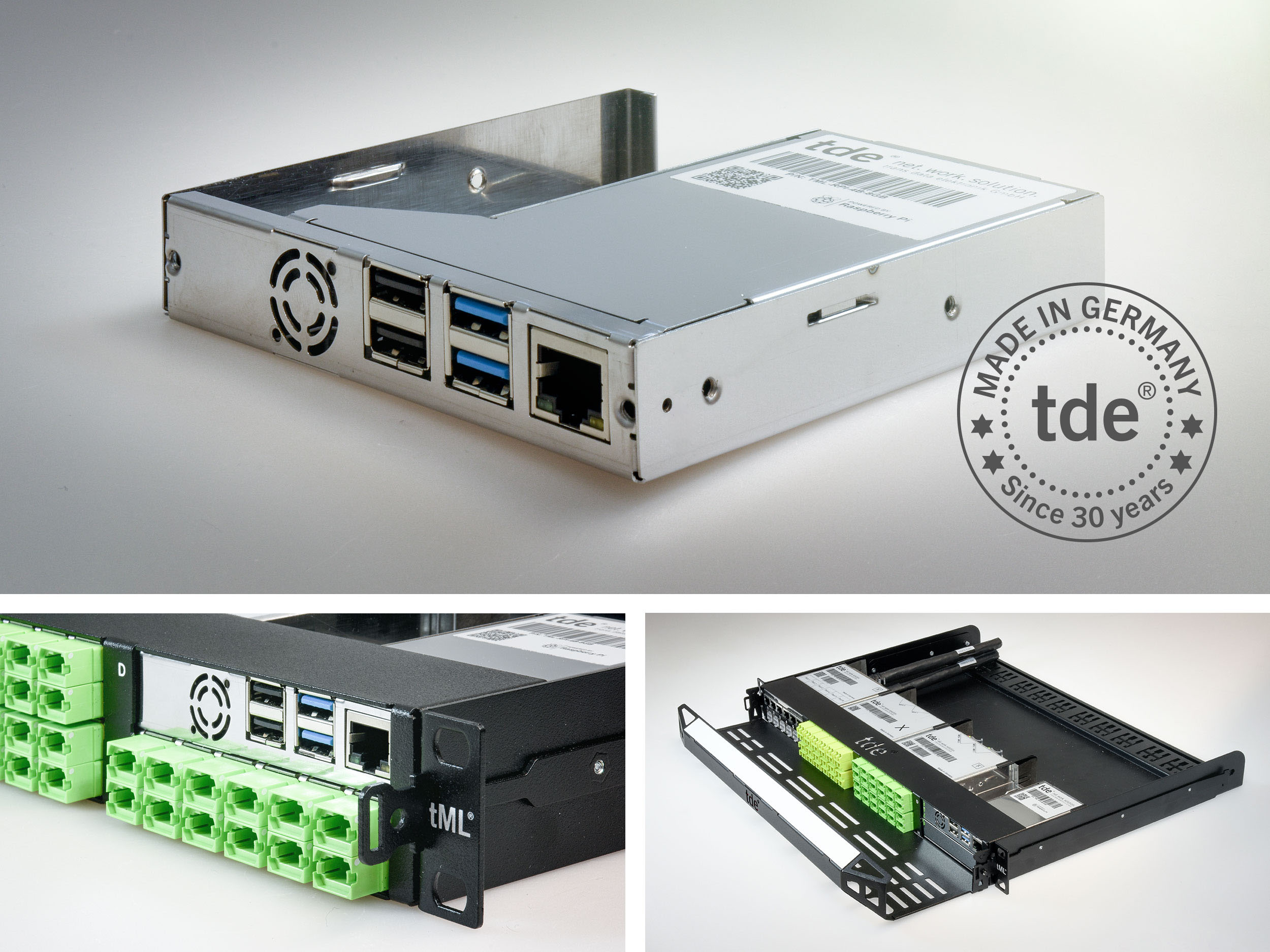 For 19-inch U or DIN rail modules: network expert adds space-saving solution for industrial and building automation to its cabling platform

Dortmund/Germany, 24th February 2021. tde – trans data elektronik GmbH has integrated the popular small computer Raspberry Pi into its modular cabling platform tML. For this purpose, the network expert has designed a stable housing made of stainless steel sheet that corresponds to the dimensions of the tML standard housing. Thanks to a thought-out connection and cable design, up to eight tML Raspberry Pi modules can be accommodated on a 19-inch unit (U) or alternatively on the DIN rail module by means of a tML DIN rail module adapter. Thanks to the modular concept of the tML system platform, network technicians can for the first time combine or mix passive (TP and fibre-optic modules) and active network components (Raspberry Pi modules). This allows applications in industrial and building automation to be realised in a very space-saving manner and significantly increases the packing efficiency in the network cabinet.

tde is once again demonstrating its innovative strength and is launching an innovative solution for industrial and building automation on the market with the tML module for the Raspberry Pi small computer: “The Raspberry Pi perfectly complements our tML system platform and opens up new areas of application in the fields of measurement, control and regulation,” says André Engel, Managing Director of tde. “The small computer is versatile and predestined for applications in the environment of automated processes in industry and buildings. Since our tML system platform has long been used not only in data centres, but also in various industrial and mobile applications, the integration of the Raspberry Pi into the tML was a logical step.”

tde has designed the tML Raspberry Pi module to be user-friendly: network technicians can access the network connection and USB connection ports from the patch area. The power connector, the aux port and the two micro-HDMI ports are accessible from the side. By routing the corresponding connection cables to the back of the enclosure, tde allows for them to be neatly routed and intercepted at the rear on the integrated breakout cable catch of the tML module rack. “This design enables us to accommodate up to eight tML Raspberry Pi modules on a 19-inch height unit of the tML cabling platform – this is unique on the market,” says Engel. For optimal cooling, tde has also ventilated its tML Raspberry Pi module: the module draws in cool air at the front and blows out warm air at the back. Companies in industrial and building automation benefit from the modular design of the tML system platform, as different modules and connection concepts can be mixed on one height unit and tML fibre-optic, tML TP and tML Raspberry Pi modules can be used in combination.

The result is a higher packing efficiency and space savings in the network cabinet. In addition, the tML cabling system scores points with its particularly assembly-friendly design: technicians can equip individual modules quickly and without tools via the tML’s pull-out drawer and snap-in mechanism at the rear, thus saving installation time. Since the modules can also be simply and easily exchanged at any time, the tML enables simple, future-proof and investment-proof migration to high transmission rates up to 400G at present. Moreover, tde has equipped its tML system with a consistent earthing concept: the snap-in locking also serves as an earthing contact for the tML modules, with four contact springs guaranteeing uninterrupted earthing. The module support is then earthed centrally.

tML is a patented, modular cabling system consisting of the three key components module, trunk cable and rack mount enclosure. The system components are 100 percent manufactured, pre-assembled and tested in Germany. They enable plug-and-play installation on site – especially in data centres, but also in industrial environments – within the shortest possible time. Heart of the system are the rear MPO/MTP and Telco connectors, which can be used to connect at least six or twelve ports at a time. The fibre optic and TP modules can be used together in a module carrier with a very high port density. The tde offers its tML cabling system as a proven tML standard system and in the highly innovative variants tML Xtended, tML-24 and now tML-32 for extreme scalability and very easy migration to higher transmission rates such as 40G, 100G, 200G and 400G.

About tde – trans data elektronik GmbH
For more than 25 years the tde – trans data elektronik GmbH, an internationally successful company, has specialised in the development and production of scalable cabling systems for highest packing density. The nuclear research centre CERN relies on the know-how of the leading company in multi-fibre technics (MPO) as well. The company”s portfolio “Made in Germany” contains complete system solutions with a focus on Plug-and-play for high speed applications in the field of datacom, telecom, industry, medical and defence. tde offers both planning and installation services through its own service department and supports the “European Code of Conduct” when it comes to energy efficiency in data centres. For more information, visit www.tde.de or follow us on LinkedIn, Twitter und Xing.